It just comes with life-changing events that, well, life changes. Duh. When one did not see the change coming, personal equilibrium gets tossed around like the frozen banana chunks in my morning smoothie. It's dizzying. In an earlier post a few months ago I questioned who I am supposed to be now that the primary person is gone who played the major role defining my station in life.

I'm no longer a wife although (thank God!) I am still a mother, grandmother, sister, daughter, aunt, niece, sister-in-law, cousin-by-marriage, and friend. Hmm. That's a lot of titles. But the wife thing-- that's the one that occupied the majority of my time, energy, and interest.

So like the occasional Rainbow Trout that Beloved would pull out of the cold Colorado mountain streams and then flop around while he got the hook out of its mouth, I'm kinda floppin' around in my thoughts.

Setting those thoughts aside for a bit, I'll share some comings and goings since my last post. 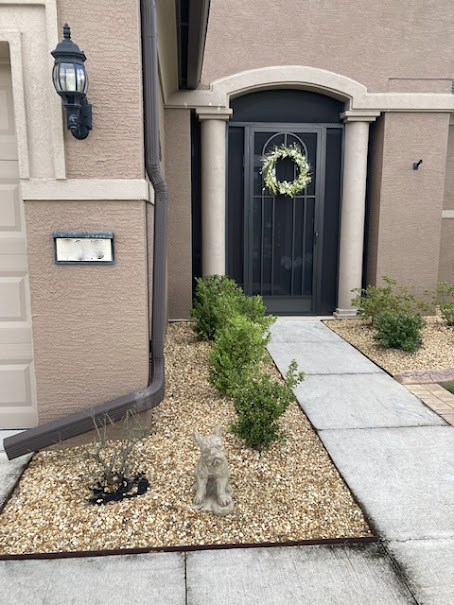 The approach to my front door has seen some changes, except for that bush that looks dead. I'm hoping life is going on in the roots and the manifestation of that will start popping out fresh new leaves. 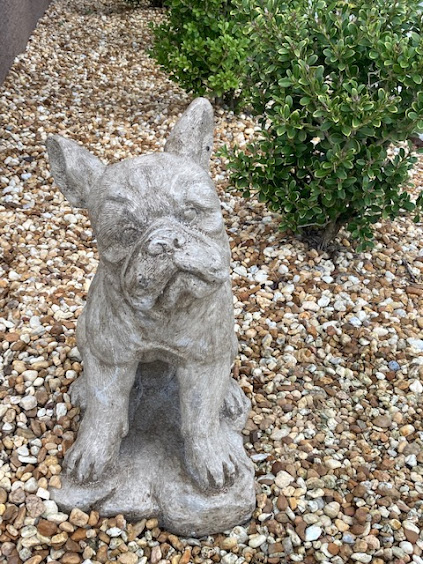 Next to the bush is my guard dog found at Lowe's. His price was right ($26) and he is solid concrete. I was glad to get him home without dropping him on my foot and/or breaking one of his ears. His name is "Bruiser" and although he looks like a pup, he's a tongue-in-cheek symbol of protection. I maintain my stance on not acquiring a real pet because I like my freedom to come and go with no kennel costs, vet bills, or trips outside to do you-know-what. Besides I have three granddogs, two grandcats and neighborhood animals to dote on. 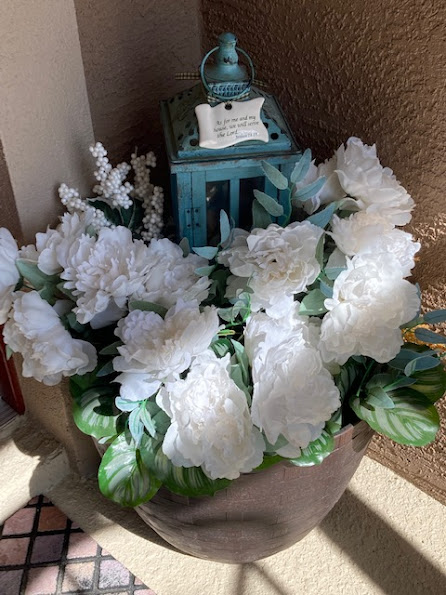 Now we're opening the front screen door to the porch to see the latest arrangement in the pot beside the front door. I'm liking the sophistication of the white blooms this year even though I have wildly colored options in a storage box upstairs. During this first year without Beloved, I can't bring myself to be bold and bright. It just doesn't express me or where I am right now. (It's interesting to see how far-reaching and in what areas grief affects a person.) 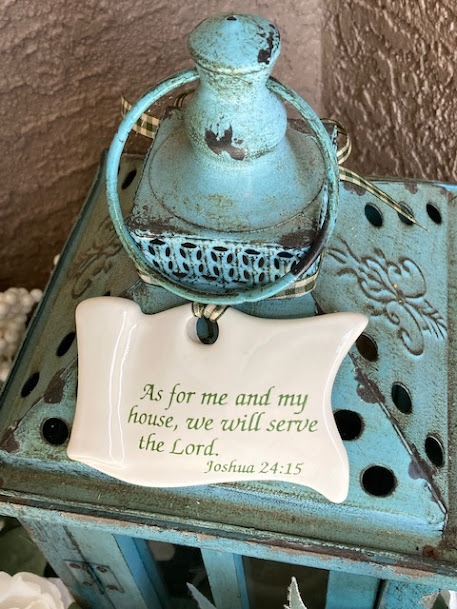 Sue will remember this little ceramic plaque because she has one just like it from a florist shop we visited in Denver years ago. It helps inform those who come to my front door who they are dealing with. 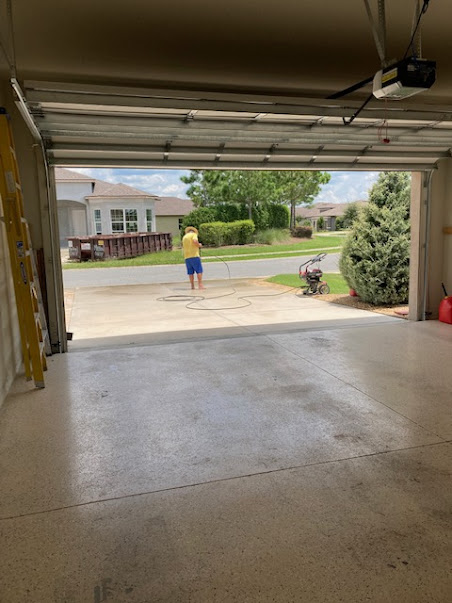 In the first photo you may have noticed the unsightly black stuff on my sidewalk. It actually looked worse in person than what you can see here. More of it had accumulated in wet spots on my driveway, too. Being from a very dry, high altitude climate, it took me some time to figure out what that black stuff was. I lost sleep one night worrying about it. I've got an HOA to satisfy and didn't want them to get onto me about it.

Mold and dirt. We're in the rainy season here and the stuff just gathers like that and is ugly. Beloved used a power washer to clean it but I never paid attention. That was his bailiwick. He's been gone long enough now that this deficit in home upkeep has shown up.

Back in the early days of grief-stricken brain fog, I told the kids to take the power washer. I assumed I would be moving and I didn't want to be in charge of outdoor maintenance. (still don't)

No, I don't want the power washer back. Beloved had problems with it and took it in for repair a couple of times, so I don't need THAT!

Anyway, I came home from Book Club the other day to see that one of my neighbors was power washing the scummy stuff for me. What a delightful surprise and a huge blessing to me! He did an excellent job. I am pleased and thankful. The Lord met me at the point of my need. 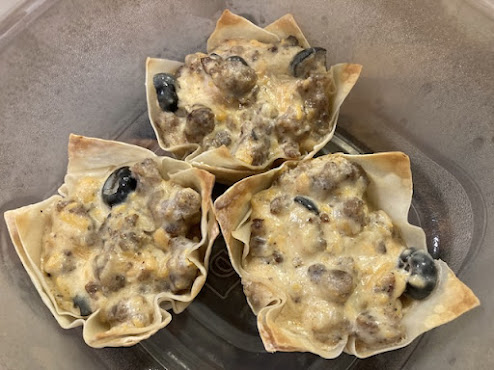 As a "thank you," I baked these "Sausage Stars" for the neighbor and his wife. This is a versatile recipe I love. Put 2 wonton wrappers in each of the lightly-greased cups of a muffin pan. Bake for 3 minutes at 350 degrees. Remove from oven. In a separate bowl combine your filling, which can be anything you want. Mine was browned bulk pork sausage, canned (and drained) sliced olives, grated cheese, a cup of prepared Ranch dressing, and a tsp of ground red pepper. Spoon the mixture into the wonton cups and return to the oven for another 5-8 minutes, until the cheese is bubbly. 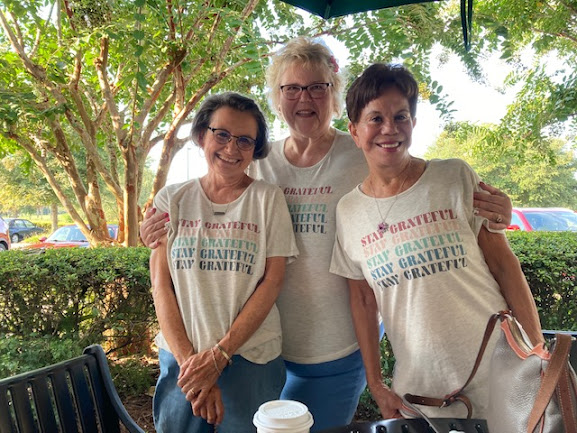 I mentioned Book Club. Three of us found shirts at a local department store that coordinate nicely with our study topic, Nancy Leigh DeMoss Woglemuth's book, Choosing Gratitude, Your Journey to Joy.
The marathon morning begins as we car pool to a coffee shop to get caught up on our lives, then to the home of one of our members for the discussion, and then we move on to a different restaurant every week for lunch. The group grows in number with each location on those busy mornings. It's fun and encouraging. 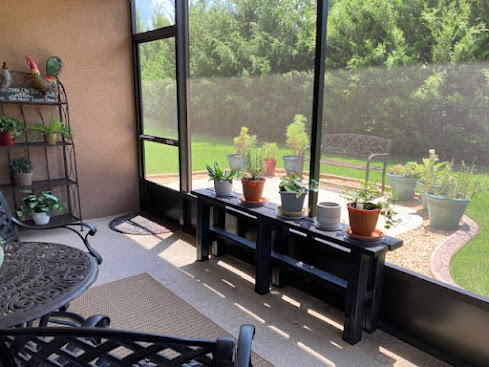 My last photo share is the back porch. In addition to the beige indoor/outdoor rug beneath the table and chairs and the Baker's Rack on the far wall, Beloved's black wood bench has been placed such that my herbs and assorted other plants can get some afternoon sunshine and even rain when the wind blows it in.

I have lost count how many benches Beloved built for me with a basic pattern, adapting it for whatever my need was at the time. He made this one for our back porch in Jacksonville, spray painting it in the back yard. He was so handy to have around!

But back to the topic of that fish out of water .... not long after we moved to this +55 community we realized we were kind of oddballs because we don't play golf and we don't play cards -- two mainstays of this environment. Beloved had back problems that prohibited his golf score from improving, and I get a little bored with mini-golf, let alone 18 holes on a daylong trek on the greens.

Raised as a good lil' Southern Baptist girl, my exposure to cards has been pretty much limited to Old Maid, Go Fish, and hearts. We don't drink, and we didn't dance publicly with people other than each other.

That's all pretty limiting. Now that my primary partner is gone, here I sit, wondering what to make of it all.

But I am encouraged by Romans 8:28, "We know that in all things God works for the good of those who love him, who have been called according to his purpose." The Lord has things for me to learn, and as Dr. David Jeremiah is saying, "God has not forgotten you [me]." He is most likely leading me to some new adventures and it will be all good.

It's a little scary but as Joyce Meyers has titled one of her books, Do It Afraid, Embracing Courage in the Face of Fear. I hear you, Joyce, and am progressing through the chapters. 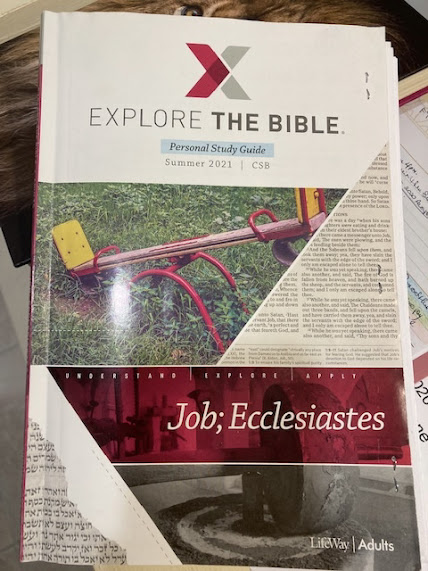 These days I'm kinda straddling the fence with churches. I attend a non-denominational mega church, but my membership is at a Southern Baptist church, and in one of my visits to see Gray Beard and Blondie, the Sunday School class handed me this study on Job and Ecclesiastes.

I don't drink, dance publicly, play cards, or attend questionable entertainment, but I do enjoy private Bible study. Engrossing myself in studies like this have helped me so much to get more of a grip on what has happened to me and how to move forward.

Right now I'm getting real with the Old Testament book of Ecclesiastes, chapter 3, grappling with 'there's a time for this and a time for that' (my paraphrase). It's time to release loosen my grip on what was and move forward. The daily email devotions I get from GriefShare are saying similar things.

I'll just be honest. This is hard. Some days I cry my way through one of his cotton handkerchiefs (flimsy tissues are not enough), and then other days I stand up, walk out the door and feel like I can do this. Any time I think I've had my last really hard cry I later realize I'm fooling myself.

But even that is not as frequent as it was, and I believe Beloved would be okay with that. I've got to get on with my life, embrace joy once again, and try to be a pleasant companion to those who bless me with their presence.

Until next time, grace and peace to you. 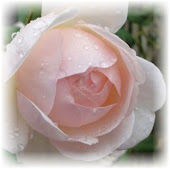 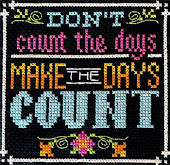 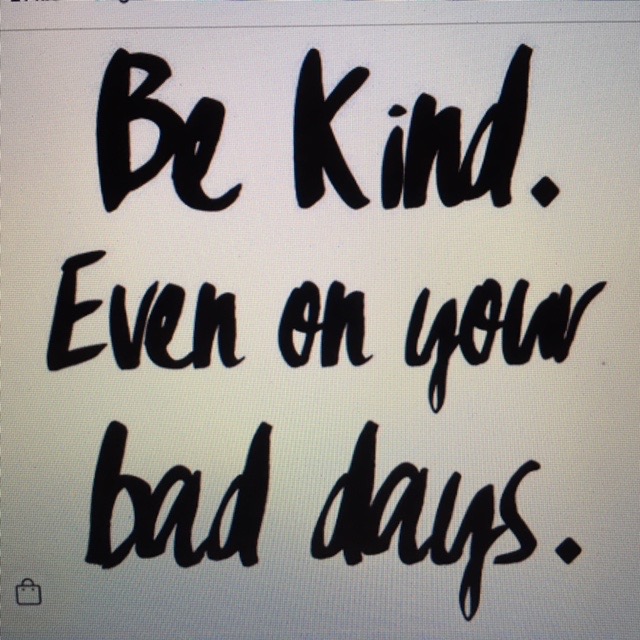 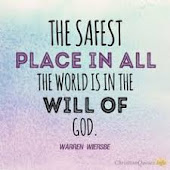